Wake Me Up When September Ends

Benchmark 10-year yields are off 6-8 basis points in Europe and the United States. The panic seen at the start of the week in the UK has subsided considerably, as sterling recovered to almost where it was a week ago, while BOE’s hand has help steady the Gilt market. Equities in Asia Pacific suffered after the losses in the US yesterday. Hong Kong and India were notable exceptions. Europe’s Stoxx 600 is recouping around half of yesterday 1.65% fall, while US futures are trading higher. The dollar is mixed, though mostly a little firmer. Among emerging market currencies, central Europe is underperforming. The Chinese yuan rose for a second session. Gold reversed higher in the middle of the week and has continued to recovery. It reached nearly $1675, a new high for the week today. December WTI is holding mostly above $80 today but is below yesterday’s high near $82. US natgas is up 1.3% after rising about 3.3% over the past two sessions. Europe’s benchmark is off almost 5%. It has been a volatile week, but it is down almost 4% this week, which is the fifth week Europe’s natgas benchmark has fallen. Iron ore slipped 0.2% after rising 0.6% yesterday. This is the third consecutive week of falling prices. December copper is faring better. It is up 1.4% today after climbing nearly 4% over the past two sessions. December wheat is also up almost 1.4% today. It is up about 3.1% this week, which would be the fourth week in the past five that prices have risen.

China’s PMI was mixed, but shows the economy continues to struggle. The improvement unexpected came from the manufacturing PMI, which edged back above the 50 boom/bust level to 50.1 from 49.4. The non-manufacturing PMI disappointed, slipping to 50.6 from 52.6. This resulted in the composite reading easing to 50.9 from 51.7. The Caixin manufacturing PMI slumped to 48.1 from 49.5. Note that China’s mainland markets are closed next week the national holiday.

Japan’s data mostly surprised on the upside. August retail sales rose 1.4%. The median forecast in Bloomberg’s survey was for a 0.2% gain. Industrial output surged 2.7%. The median projection was also for a 0.2% gain. On a year-over-year basis, housing starts were expected to fall 4.0% in August. Instead, they rose 4.6%. The unemployment rate slipped to 2.5% from 2.6%, as expected, while the job-to-applicant ratio rose more than anticipated to 1.32 from 1.29. Next week begins with the Tankan Survey, in which large businesses are seen doing better than small businesses. Tokyo’ CPI (October 4) is a good indicator of the national reading. The headline rate may ease slightly from the 2.9% seen in August, while the core rate, which excludes fresh food, by have risen a little. The strength of today’s retail sales report likely reflects an overall rise in household spending, while case earnings probably slowed.

South Korea reported a larger than expected drop in industrial output. The median forecast in Bloomberg’s survey called for a 0.8% decline in August after the 1.3% decline in July. Instead, it fell by 1.8%. The reason this is particularly noteworthy is that for the first-time semiconductor output fell on a year-over-year basis (-1.7%) for the first time in four years. Separately, but related, chip inventories swelled (67.3%), while factory shipments fell for the second consecutive month. This is seen reflecting a slowing of world demand. Lastly, we also note that South Korea sold $15.4 bln in Q2 to support the won. That is the most since it began disclosing the intervention in 2019. The won fell to 13-year lows this week.

The US dollar is slightly more than a quarter-yen range around JPY144.50. It has spent most of the last three sessions in this range as well. The market seems reluctant to push the greenback above JPY145, thinking it risks another round of intervention. After posting a potential key upside reversal in the middle of the week, the Australian dollar has traded sideways below $0.6530, the midweek high. Initial support is seen ahead of $0.6450. Recall, it settled slightly below $0.6530 last week. The PBOC’s threat of intervention and positioning ahead of next week’s holiday, saw the yuan strengthen for the second consecutive session and snapping an eight-session slump. The reference rate was set at CNY7.0998. The median projection (Bloomberg’s survey) was CNY7.1556. Officials were said to have told banks that it wanted to see more activity closer to the reference rate. The dollar fell to about CNY7.0835, a new low for the week. We note that India delivered the 50 bp hike that was widely expected.

The preliminary eurozone September CPI was a little firmer than expected. The headline rose to 10.0% from 9.1%, with the month-over-month rate up 1.2%. The core rate accelerated from 4.3% to 4.8%. The swaps market has about a 75% chance of another 75 bp hike when the ECB meets again on October 27. It has 130 bp increase before the end of the year, which suggests at least a 50 bp hike at the last 2022 meeting in December.

There are two UK developments to note. First, in terms of economic data, the final look at Q2 GDP was better than the first. Rather than contract by 0.1%, the economy expanded by 0.2%. Consumption edged higher, instead of slipping, and the drag from government spending was not as great as initially thought. Exports were stronger, and there was a smaller current account deficit, but investment was weaker. It is nice to know, but events have superseded the economic data to drive policy. And the is the other development. The government is not backing down, but it is meeting with the Office of Budget Responsibility (OBR), for which it seemed to have wanted to side-step with the mini budget. The 10-year Gilt yield is off 10 bp today to about 4.04%. It finished last week 3.83%. The 30-year yield is off about 14 bp to 3.82%. It was at 4.04% a week ago.

The euro posted a key upside reversal on Wednesday. It had made a new 20-year low (~$0;9535) before reversing higher and closing above the previous session high. There was follow-through buying yesterday and more today as the single currency rose to almost $0.9855. This might be all there is ahead of the weekend and the high corresponds with a (61.8%) retracement of the leg down since the September 20 high near $1.0050. It settled last week slightly below $0.9690. Sterling bottomed on Monday near $1.0350. It has risen and settled by session highs for the last couple of session and reached about $1.1235 today. Recall that it finished around $1.1260 on the eve before the mini budget. The intraday momentum indicator warns that maybe it for the week. Initial support now may be seen near $1.1120 and then $1.1070.

The decline in the weekly jobless claims to five months is one of the dimensions of the labor market that will underpin the Fed’s argument that the labor market can absorb further tightening of financial conditions. The Fed’s median dot projects 125 bp increase in Q4. The Fed funds futures are pricing in only a 2/3 chance that 75 bp hike will be delivered next month. Today’s data is unlikely to spark an important shift. The personal income and consumption reports will help fine-tune forecasts for Q3 GDP, which with the help of inventory build and smaller trade deficit, the first positive reading of the year seems likely. The deflators are expected to echo the CPI. Softer headline rate (year-over-year) while the core rate is sticky. The final reading of the University of Michigan’s consumer sentiment in inflation expectations will draw passing interest. Several Fed officials speak today:  Barkin, Brainard, Bowman, and Williams. There seems to be a convergence of view among officials, which partly means there may be little fresh news.

Slightly better than expected Canadian July GDP (0.1% for a 4.3% year-over-year pace) was unable to do two things. First, it was not strong enough to shake ideas that the economy is slowing dramatically after the first half and aggressive rate hikes. Second, it was not able to Canadian dollar sales. The drop in US stocks seemed to be a more significant driver. The 30-day rolling correlation between the changes in the Canadian dollar’s exchange rate and the S&P 500 is at its highest in more than two years (~0.82). The correlation between the exchange rate and WTI is less stable, but around 0.55, it is the strongest in almost two months. The swaps market thinks the Bank of Canada is almost finished with its tightening. Its confident of a 50 bp hike on October 26 to bring the target rate to 3.75%. It sees the terminal rate around 4%.

Mexico’s central bank hiked its target rate 75 bp as widely expected to 9.25%. This was the third such move, and they followed three half-point moves earlier this year. The first hike was delivered in June 2021, nine months before the Fed’s first hike. The swaps market sees the terminal rate near 10.5% in Q1 22. However, if Banxico is going to match the Fed, it would see the target rate at 10.5% at the end of this year. The central bank says it will continue to raise rates while inflation is accelerating. Next week (October 7) will report the second half and whole month of September CPI. Price pressure momentum appears stalling.

The US dollar has swung between roughly CAD1.36 and CAD1.38 this week. The greenback found support in North America yesterday and in Europe today near CAD1.3650. The upper end of the immediate range is around CAD1.3750. The Canadian dollar has fallen out of favor (as risk appetites have dried up). Barring a sharp setback today, this will be the third week of USD gains, and seventh week in the past nine. The Mexican peso, in contrast, continues to show an impressive resilience. After spiking to almost MXN20.60 in the middle of the week, the US dollar is now at new lows for the week below MXN20.10. It settled at near MXN20.2080 last week. With today’s gains, the peso is slightly higher on the month, making it the best emerging market performer after the rouble. Brazil goes to the polls this weekend and projections that Lula could win in the first round seemed to weigh on sentiment. The dollar closed at two-month highs yesterday against the real near BRL5.40. The six-month high set in July was closer to BRL5.5150. 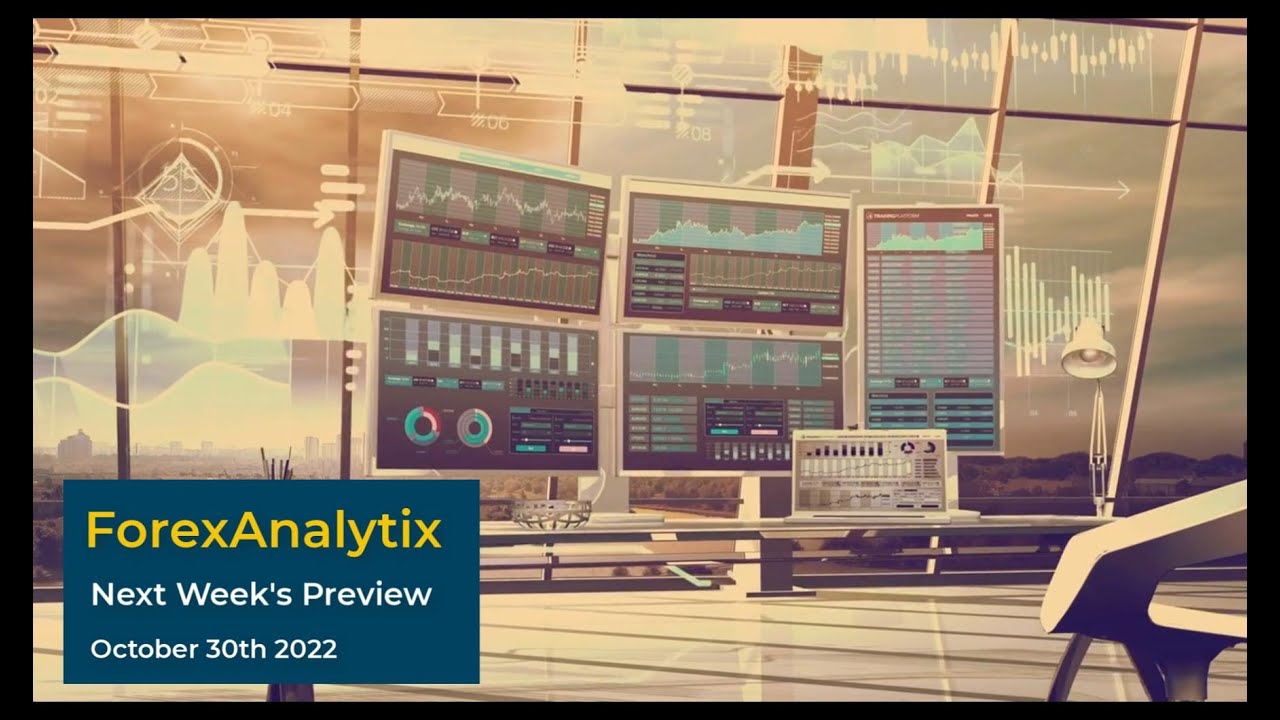 While the Market Trades Sideways, This Sector Pushes to New Highs