•    The US dollar is mostly softer, but the tone is one of consolidation ahead of tomorrow’s US jobs report.
•    Energy prices staged a dramatic downside reversal yesterday and follow-through selling materialized in Asia and Europe.
•    A deal to extend the US debt ceiling into December appears to relieve some immediate pressure but the underlying conflict, including within the Democratic Party, remains resolved.
•    The groundwork for a Biden-Xi virtual meeting later this year appear to have been laid yesterday.
•    China’s market re-opens tomorrow after being closed for the past week.  Travel during the Golden Week holiday is reportedly subdued.  The offshore yuan is little changed during the mainland’s holiday.

The animal spirits have been reanimated today.  Encouraged by the dramatic reversal in oil and gas prices, a deal in the US that pushes off the debt ceiling for a few weeks and talk of a new bond-buying facility in the euro area spurred further risk taking today, ahead of tomorrow’s US employment report.  The sharp upside reversal in US shares yesterday carried over in Asia and Europe today.  The Hang Seng, battered lately, jumped over 3%, and the Nikkei posted its first rise in nine sessions.  Taiwan, South Korea, and Indian indices rose more than 1%.  Europe’s Dow Jones Stoxx 600 is also up about 1%, and US index futures are seeing follow-through buying.  Meanwhile, the US 10-year yield is hovering around 1.52% after pulling back from 1.57% yesterday.  European benchmark yields are also softer after testing three-month highs yesterday.  The dollar has a softer profile against most major currencies, though the yen and the Norwegian krone are struggling, and the leaders, like the Antipodeans, are up a modest 0.2%.  Emerging market currencies are firmer, with the JP Morgan EM FX index posting its first gain of the week.  Note that the World Health Organization announced its first vaccine for malaria yesterday.  Gold is near the middle of its $1.745-$1770 range,  while the industrial metals are also higher.  November WTI posted a key reversal yesterday by making new highs before reversing lower and settling below the previous session’s low. Continued selling today has returned the contract to the week’s low near $75.  It had approached $80 yesterday.  The US Nov Natgas contract also posted a key reversal yesterday, and it too is seeing follow-through selling today as it tests the 20-day moving average (~$5.38), which it has not closed below since late August.  The CRB Index fell yesterday for only the second time since the FOMC meeting last month.

After reportedly meeting for six hours yesterday, US National Security Adviser Sullivan and China’s senior foreign policy official Yang managed to make some headway toward a Biden-Xi formal virtual meeting later this year. However, it is not clear what to make of it.  On the one hand, without a strong sense of a positive outcome, there seems little reason to have such talks. But, on the other hand, neither side has changed its behavior.  China continues to send large numbers of military planes into Taiwan’s air identification zone and claims large parts of the South China Sea, encroaching on the territorial waters of Malaysia and the Philippines, for example.  At the same time, the US has offered to share nuclear technology with Australia and does not hide that it wants to lead an alliance to check China’s assertiveness in the region and is discouraging investment in China.

The Golden Week holiday is winding down, and mainland markets re-open tomorrow.  Ahead of it, China reported its reserves fell for the second consecutive month.  The $31.5 bln decline is the second largest of the year and likely primarily reflects valuation adjustments.  Recall that the other reserve currencies fell against the dollar in September, with the euro off nearly 2% and the bond’s sold-off.  The US 10-year yield, for example, rose almost 18 bp.  Meanwhile, estimates suggest domestic travel during the Golden Week has been sluggish, and tomorrow the Caixin service and composite PMIs will be reported.  Recall that in August, both were below the 50 boom/bust level.  Lastly, when the mainland markets closed before the holiday, the dollar settled slightly below CNH6.45.  It is now trading around CNH6.4535. That suggests little change in the onshore yuan, against which the dollar closed a little below CNY6.4450.

The dollar is in a narrow range of less than a third of a yen so far today, mostly below JPY111.50, where an option for about $760 mln expires today.  The price action is within yesterday’s range. There is another option for $865 bln at JPY111.00 that also rolls off today.  It takes a break of the JPY110.80 area to signal anything important.  Yesterday’s high near JPY111.80 looks safe.  The Australian dollar recovered from testing the $0.7220 yesterday and returned to its nemesis around $0.7300.  It has been repeatedly probed since mid-September but has failed to close above it even once.  Even if it does, the $0.7325 area is the next important hurdle.

The ECB was buying sovereign bonds before the pandemic struck.  The Asset Purchase Program had strict parameters in terms of the capital key and country limits.  It was and continues to buy about 20 bln euros a month.  It was too limited to serve the purposes of the emergency. However, the Pandemic Emergency Purchase Program is to wind down at the end of Q1 22.  Talk of modifying the APP has been circulating for several months.  The new reports are part of this discussion.  A more flexible facility is sought by some, but the problem that has gone unobserved in these new reports is that the APP’s limitations are why it passed constitutional muster.  Making it more flexible such as deviating from the capital key, could spur legal challenges.  The ECB meets later this month (October 28), but a decision on APP is not expected until December at the earliest.  Moreover, because the ECB will continue to buy bonds, it is not clear that the PEPP needs to wind down like the Fed’s planned tapering.

Following the surprisingly poor factory orders (-7.7%) seen yesterday,  Germany reported an equally dismal industrial production performance today.  Rather than fall by 0.5% as the median forecast in Bloomberg’s survey anticipated, German industrial output tumbled by 4%, leaving the year-over-year advance at a modest 1.7%, down from 6% in July.  The downside surprise will prompt economists to cut Q3 GDP forecasts.  Manufacturing (autos) and construction were hit hard.  Auto output contracted by 15.7% in August.  The aggregate estimate for the eurozone is due next week.  Recall that Spain’s August industrial production was reported yesterday as having fallen by 0.3%.  The median forecast in Bloomberg’s survey was for a 0.9% gain.  Rising energy costs and the semiconductor shortage are the main culprits.

The reversal of energy prices may have been spurred by Putin’s apparent offer to make more gas supply available, the larger increase than expected in US inventories, and the suggestion the US could release more oil from its strategic reserves.  Europe’s energy commissioner seemed sympathetic to calls from Spain and Italy to move toward joint energy purchases.  Out of crisis comes greater efforts of coordination and unification.

The euro has been confined to about a quarter of a center range above $1.1550. Yesterday’s low and now the low for the year was slightly below $1.1530.  The market seems reluctant to push it much now ahead of tomorrow’s US jobs report.  The week’s high was set on Monday near $1.1640.  Today is the first session of the year that the euro has not traded above $1.16, and there is a 1.6 bln euro option that expires there today.  Sterling is also consolidating in a narrow range of about a third of a cent (~$1.3570-$1.3605).  The market does not appear to have the appetite to push it outside of yesterday’s range (~$1.3545-$1.3635).   Sterling is slightly firmer near midday in Europe and has risen in four of the past five sessions.

The Republicans have offered not to block an extension in the debt ceiling into early December. Instead, they will agree to a fixed dollar amount to cover the necessary spending.  This will ease the immediate threat of disruption and change the T-bills that are being avoided. However, the underlying challenge is not addressed, and the drama will continue to play out.  The problem is that the Democratic Party is not united.  If it were, the GOP obstruction could be overcome.  In addition, Democratic leadership insists on GOP support for lifting the debt ceiling, but this is a nice to have and not a must-have as the parliamentarian has ruled it could be covered by the reconciliation process.  When Biden was a Senator, the Democrats did the same thing to the Republicans, i.e., forcing them to lift the debt ceiling without their support.  This is the same dance with many of the same partners, but the other is leading now, which may help explain why most investors seem to be looking through the brinkmanship.

US weekly jobless claims have risen for the past three weeks.  Economists continue to look for a decline as risk taking continues, and the median guesstimate is for a 14k fall to 348k.  A Bloomberg report claims the whisper number is a little higher, but it is unclear what a whisper number really means here.  It is a water cooler conversation?  Is it a serious forecast, and why isn’t it picked up in the survey?  Different newswires and economic groups conduct their own surveys, and the medians often converge as would expect. Still, clams of a whisper number cannot be verified, and its purpose and impact are suspect.

Canada reports its Ivey Purchasing Managers Index today.   It has been choppy this year after finishing 2020 at 46.7.  The year’s peak was in March at 72.9.  It fell to 60.6 in April, and in June, it was back near 72.0.  It fell in July to 56.4 and rebounded in August to 66.0.  Canada’s September jobs data will be reported tomorrow, and the median forecast (Bloomberg) calls for a 60k increase in jobs and the unemployment rate to dip below 7%.  Mexico reports September CPI figures, and the headline is expected to accelerate to 6%.  The core rate is expected to have also accelerated.  The central bank meets on November 11 and is expected to hike rates again.

The US dollar eked out a small gain against the Canadian dollar yesterday.  It was the first gain in five sessions.  It is trading with a slightly heavier bias today.  The greenback is holding below CAD1.2600.  The week’s low was set on Tuesday near CAD1.2545.  While this offers initial support, the key may be the CAD1.2495-CAD1.2515 band that holds last month’s low and the 200-day moving average.  The greenback reversed low after trading above MXN20.88, a six-month high.  It closed near MXN20.5550, and follow-through selling has seen the US dollar slip below MXN20.50.  A break could see MXN20.35-MXN20.40.  The dollar filled its open gap against the Brazilian real yesterday but still settled outside of Tuesday’s range.  It may re-enter it today. The low on Tuesday was around BRL5.4255, which may offer support today. 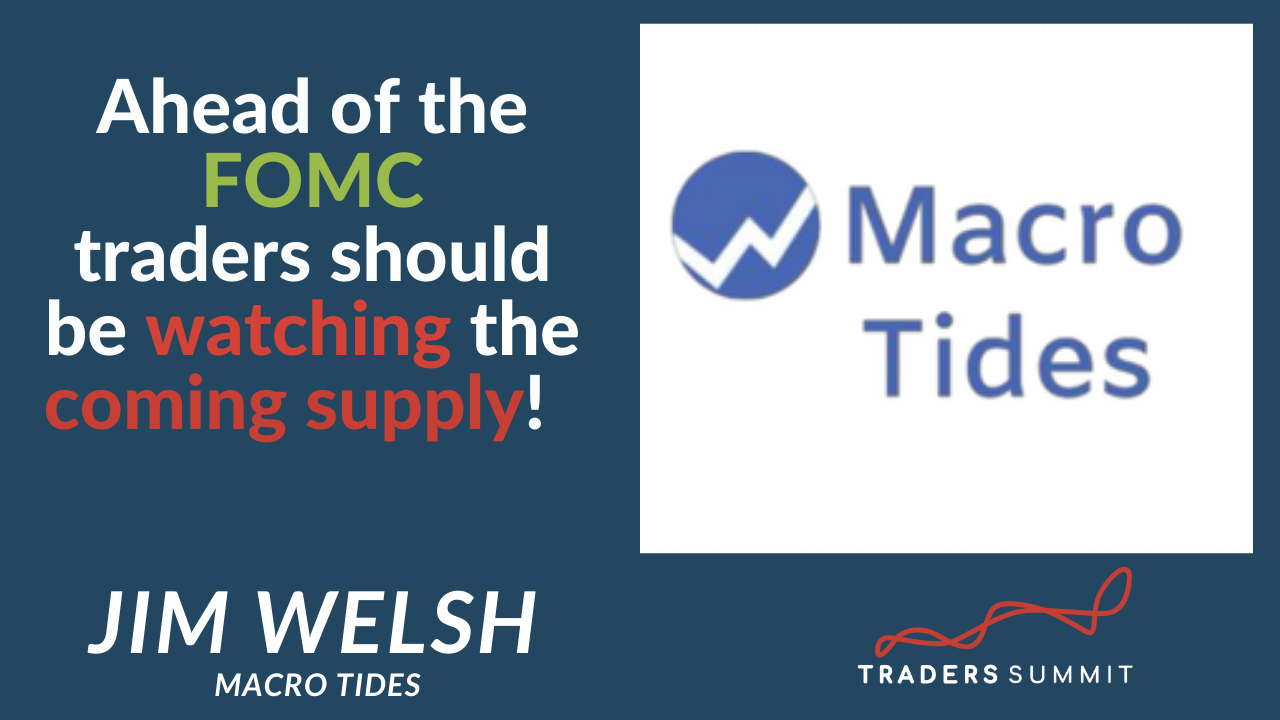 Jim Welsh Interview – “Still confident the USD will Rally and GOLD will come under Pressure!”

The Battle of Paid and Zero Commission Trading Continues

You Shouldn’t Trade Markets Without a Relationship